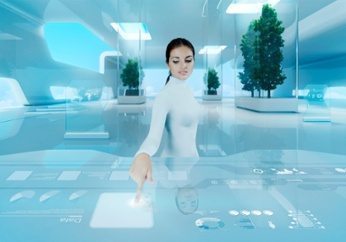 Sometimes predictions disappoint, but sometimes reality meets, or even surpasses, the most far-flung

predictions for the future. When Isaac Asimov suggested that people would one day have their own pocket-sized devices allowing them to read every book ever published, communicate with one another across thousands of miles in a split second, and even track their location, it sounded crazy, and now we take the iPhone and Kindle for granted.

Some of these predictions may sound crazy, but wait ten years and then see what you think.

Google Fiber brings us very close to the point in time where you can offer a free Wifi hotspot, and it will be physically impossible to fill its effective range with enough people to slow it down. In 2025, ISP’s will market to businesses and high-end power users, and the rest of us will use their free, or advertiser-powered internet.

The plummeting price of 3D printing means that if you want to buy a miniature table for your dollhouse, you won’t have to pay for shipping, and you won’t have to worry about the post office breaking it. If you find a piece of costume jewelry, a children’s toy or a miniature that you like, you’ll be able to purchase and print it in seconds.

Today, everyone has an iPhone. Ten years ago it was laptops. Ten years before that, it was desktop PC’s. But now we’re looking at Apple Watches, iPads, Google Glass, augmented reality goggles, and all variety of wearables, carriables and even implants, all with their own purpose and their own demographic, but connected to the same internet. In ten years, it’ll be hard to find two random people carrying the same device.

Self-driving cars, automated homes, English as a programming language, in ten years, we’ll spend very little mental energy on the boring parts of life, leaving us free to focus on what really interests us. Thinking about the internet will probably be a thing of the past as well. Do you think of concrete, steel and rubber on a daily basis? Probably not. In ten years, the internet will just be another type of glue that holds the world together.

The Problem With Free Websites

Facebook Cover Photos: How to Profit Off a Picture

Is Your Marketing Becoming Obsolete?