Web design has made some major advancements over the years. Here’s a look at what some of the world’s most popular websites looked like in the past with Your Favorite Websites | Throwback Thursday Edition!

The popular web-based search engine was officially launched in 1998. You can see that over time their logo has subtly changed, even dropping the unfashionable drop shadow effect and stripes. Its also worth noting, their boasting of successfully indexing 25 million web pages, which is quite comical considering they currently track over 35 billion pages!

YouTube began in 2005 when three former PayPal employees started to create a video-sharing website on which users could upload, share, and view videos. By the summer of 2006, YouTube was one of the fastest growing sites on the web, ranking as the fifth most popular website on Alexa.

Originally called “Thefacebook”, the site launched as an online directory for students attending Harvard University. Within the first month, more than half the undergraduate population at Harvard was registered on the service. In March 2004, Facebook expanded to Stanford, Columbia, and Yale. This expansion continued when it opened to all Ivy League and Boston-area schools and then universities in Canada and the United States. Facebook was incorporated in the summer of 2004, entrepreneur Sean Parker, became the company’s president. In June 2004, The company dropped ‘The’ from its name after purchasing the domain name facebook.com in 2005 for $200,000.

Yahoo, which stands for “Yet Another Hierarchical Officious Oracle,” was created in January of 1994.

The word “Yahoo” had previously been trademarked for barbecue sauce, knives and human propelled watercraft . Therefore, in order to get control of the trademark, the exclamation mark was added to the name.

Starting in March of 2006 with a project name of “twittr”, the social network was designed for short messages. The service rapidly gained worldwide popularity, with more than 100 million users who in 2012. As of May 2015, Twitter had more than 500 million users. 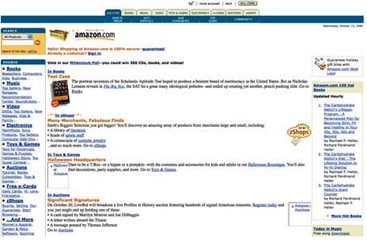 We hope you enjoyed this short trip down website memory lane! Remember, whenever you meet someone at a networking event or give someone your business card, one of the first things they are likely to do is check out your website.  Your site is your businesses shop front, open 24 hours a day, 365 days a year and you need it to represent what your business does today, not what it did six months ago. What sort of impression does this give your potential customers?

We’re not pointing this out to judge, we know what it’s like to run a business, you’ve got a thousand and one things to do and updating your website isn’t anywhere near the top of the list.  But think again about the impression you are giving to your visitors;  potential customers. An up-to-date website demonstrates that you’re a company that keeps on top of things.

Your Biggest Selling Feature Could Be An Easy To View Website

8 Ways to Express Your Gratitude to Veterans

Are you spOOking your customers? (3 common mistakes)

Welcome to The Future

5 Signs You’ve Written A Killer About Us Page

A Cheat Sheet to Protect Your Website from Common Oversights

The Case for a Marketing Investment… Especially During Tough Times
Why User-Generated Content is Essential
Why You Should Focus on Your Website’s UX in 2020
Why E-Commerce Sites Should Target Millennials
Should Your Site Offer Dark Mode?